Reducing the Gender Pay Gap to Balance for better

As we move further in the year, another International Women's Day is here! Firstly, if you are a woman reading this, I would like to congratulate you for whatever you have achieved so far and to all the Men, thank you for supporting us and helping us reach where we are.

The theme for this Women's Day is #BalanceForBetter, which highlights why this day was launched - to achieve full gender equality in this world.  However, a stagnant 'GENDER PAY GAP' still exists and we need to take action for equality. Apart from trying my personal best to consult women regarding their career progression and finding them the right roles, there is not much I can do to fight this inequality on a mass basis.

That is why this International W​omen's Day, I decided to look at where I could make the most impact, with the most relevant information and along with reaching the maximum amount of people. Since I predominantly work in the banking sector and I am in constant touch with their HR managers, therefore I decided to focus on the Gender Pay Gap in this sector.

Surprisingly, both, the bonus and pay gap in Banking are considerably higher than the pay gap across other industries! A study by PwC highlights that the gap was around 14% in other industries, whereas a whopping 35% in banking.

The following chart shows the median and quartile range of mean and median pay gaps in banking compared to all UK companies. 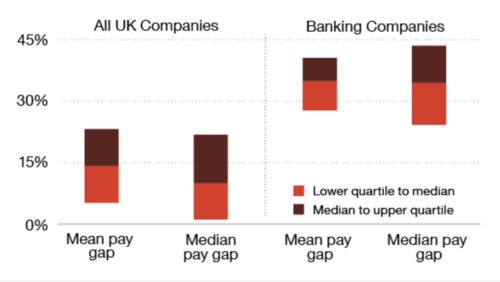 The solution to this problem is just not paying women more, but hiring more women into senior leadership roles, as that is what is causing this gap. Varied talent management solutions are being applied by leading banks which has actually resulted in some fluctuations. To understand further, I compiled the table below, which covers how these figures have changed over the last two years.

Even though companies are taking positive steps to reduce their gender pay gap, it would take time to actually reduce their gap. Anna Sandford, a solicitor at PwC, pointed out the reason behind the increase in the gap for some organisations due to their gender representation. Even if they are attracting and recruiting women at a high pace, this would initially increase a firm's gap as these roles are being filled at an entry level. Moreover, if organisations have focused on filling senior positions, then changes may happen gradually and it would take considerable time to actually show a massive reduction in their gender pay gap.

I assume these numbers would be more significant when an organisation has implemented it's gender and talent management policies for at least 5 years, to see what is working and what isn't...

Thus, to understand further, I have compiled an e-book which covers the initiatives taken by the banks mentioned above to reduce their gender pay gap. If you would like to read it please submit your details below and download it now!

Thank you for reading and a Happy International Women's Day! Let's #Balanceforbetter by #suceedingtogether.

Read how banks are actively trying to reduce their gender pay gap by downloading the PDF below.

How are banks reducing their gender pay gap.pdf