On 28th April I will be taking part in the London Marathon and I’m hoping to raise as much money on behalf of Children with Cancer UK (https://www.childrenwithcancer.org.uk/) along the way.

Every day 12 families in the UK receive the devastating news that their child has cancer. I think most families have been touched by the big C in some way, shape or form, but as a father of 3, thankfully healthy, young children, this statistic seems especially harrowing/difficult to get my head around.

I’m 8 weeks and over 300 miles into my training schedule and the knowledge that my efforts will help support patients and their families cope with everything a cancer diagnosis brings is spurring me on through the early starts, long runs, aches, pains and generally every regular nagging thought to stop running!

This will be my 2nd attempt at a marathon. My first effort in 2016 resulted in a hernia operation, an ill-advised experiment to see how far you can run with an injured hamstring and a large tube of freeze gel, and consequently, an enforced 6-month lay-off from running. Let’s just say I’ve got unfinished business with 26.2 miles!

Running feels like it was somewhat thrust upon me by my 30s / fatherhood. Whilst my football career petered out, my appetite for a beer and eating whatever I wanted to remained as strong as ever, and before I knew it I was flying home from a particularly heavy holiday to the 2010 World Cup weighing in at 100kg, scarcely believable for someone mercilessly mocked for being painfully skinny throughout their youth. 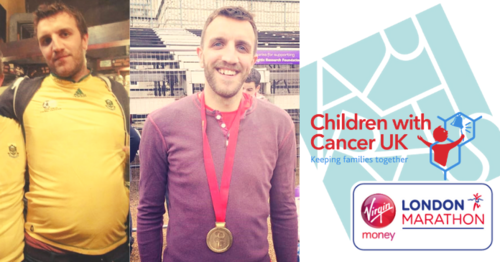 My initially feeble attempts to shed my ‘holiday weight’ were finally accelerated when I became a father in 2012. Wanting to be an active Dad, capable of keeping up with the boundless energy of my kids, it was time to put on the running shoes and see if I could resurrect my once athletic self.

So now after several years of scaling up my running, I find myself in the midst of marathon training, hopefully in better shape / less prone to injury than in 2016 and well placed to assist Children with Cancer UK in funding the vital specialist research required to save the lives of children with cancer and keep families together.

A single child dying from cancer is one too many. With our support, Children with Cancer UK is helping to create a future in which every child with cancer experiences ringing their end of treatment bell. 82% of children now survive cancer for 5 years compared to 79% a decade ago (AIG 2014).

Through Virgin Money Giving, you can sponsor me and donations will be quickly processed and passed to Children with Cancer UK.

I really appreciate all your support and thank you for any donations.